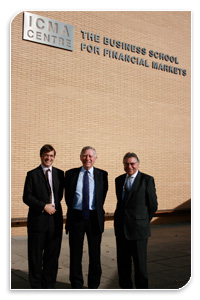 The ICMA Centre last week welcomed Sir Brian Unwin to give a short lecture to MSc students as part of its series of guest speakers from the financial world. Sir Brian Unwin, formerly President of the European Investment Bank, the world's largest non-government borrower in the capital markets, was introduced by Rene Karsenti, Executive President of the International Capital Market Association, spoke to some 160 MSc students on the current banking crisis and in particular on the Northern Rock issue.

Sir Brian previously addressed the formal opening of the ICMA Centre back in 1998, then called ISMA, not long after the ICMA had committed a further £5million to the £3million it had already provided to expand and enhance the Centre. Now retired, Sir Brian decided to reflect on his 1998 speech and see if any of the predications he made then have come true. He recalled when ten years ago, his optimistic views on the Euro were met by scorn and disbelief, and now, the Euro has more than fulfilled the expectations of its promoters, having been introduced on time and without a technical hitch. Sir Brian summed up the Euro by saying that ''the eurozone has provided an environment of low inflation monetary stability that is a necessary, if not sufficient, condition of economic growth for the European economies''

Sir Brian then moved on to talk about the major consolidations and acquisitions of banks that have taken place in recent years, and how the Euro has intensified competition in the European banking sector. He also spoke of how rapidly globalization of financial markets has occurred and the problems that it has brought with it, including developments such as Hedge Funds and Private Equity. One of the key pieces in his speech was the recent Northern Rock crisis, ?the first major run on a British Bank for 141 years' and that it was a casualty of the recent process of imprudent lending and seizing up of credit. Sir Brian blamed the fiasco on the Board and Management of Northern Rock and that ?The crisis might have been averted if the regulatory authorities had been more prescient, quicker to react and better coordinated.'

Sir Brian concluded by making a few predictions about the future, and that sometimes this is difficult to foresee in such a volatile a marketplace, but we shouldn't be worried of any real damage to the International economy, however he ended by saying that there are ?interesting times ahead of us'

ICMA Centre Senior Fellow Richard Comotto has appeared on Reuters commenting on a recent International Capital Market Association (ICMA) white paper looking at the financial crisis in Greece and the preceding crisis with the collapse of Lehman Brothers.