Ollie Jarvis, an officer of the Finance Society, has provided a review of a recent talk from Fred Ng, a turnaround practitioner with experience across the globe. 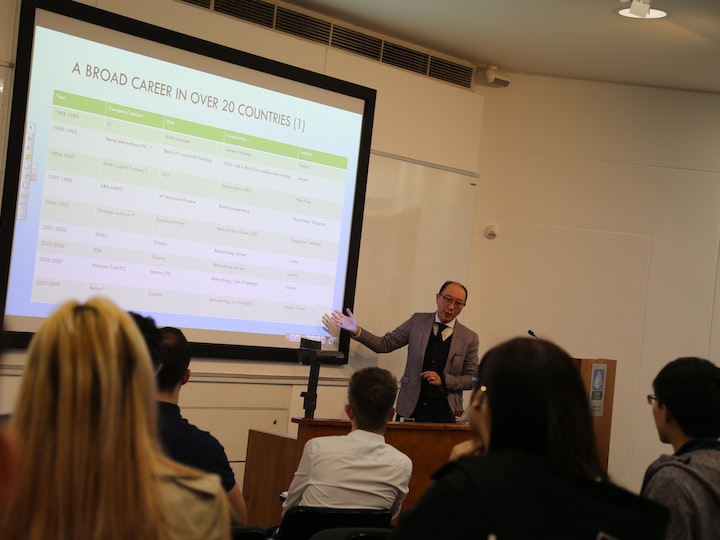 Mr. Fred Ng is an alumnus of the Henley Business School, University of Reading, during which he studied for his MBA before beginning his career at Ernst & Young where he stayed for 7 years. During his time there, he gained valuable skills that would give him a strong foundation for his working life, that has seen him work in over 20 countries spanning Europe, Africa and Asia.

During his talk, Fred explained how he is a self-employed turnaround practitioner. This involves him being brought into companies, that aren’t perhaps doing too well, to advise and consult with them to aid in their rescue. This could be through a financial restructure, perhaps involving raising capital or a debt-equity swap, or through an operational restructure that would look at the underlying performance of the company and make changes there. Fred has over 20 years’ experience in both financial and operational restructuring and has helped some large companies such as Imagi as well as Ferretti, the luxury yacht manufacturer based in Italy.

It was interesting to hear about Fred’s time spent at Heron, where he played a major role as their head of corporate planning, to support the negotiation and successful implementation of their restructuring, where a debt-equity swap was used to help revive the company seeing a large portion of it sold to banks. This also gave him a vital foundation in technology skills that would become of great use later on in his career. A key point Fred also explained before he takes on a job is that you must be able to decide if a company can actually be saved.

The talk was concluded with a questions and answers session from the floor, some of those are below:

What is the best way to get into restructuring?

‘Perhaps through joining an investment bank and trying to find a way in through there, or perhaps through an M&A route as well. It is important to have the key core skills already established that will be needed in this role.’

What is a highlight of your career?

‘Definitely the period where I was working for Ferretti. Getting to spend 3 years working in Italy, more importantly for a product I was interested in, was amazing, both for my personal and professional life.’

The ICMA Centre an the UoR Finance Society would like to extend their thanks to Mr. Ng for delivering a very insightful talk!