The 7th Industry Insights event was presented by David Slater and organised by the ICMA Centre in partnership with the University of Reading Finance Society. During this insight he talked about his career, his experience as a trader during the 2007-2009 crisis and the changes that happened after this event in the financial industry. He also gave out important tips for interviews. 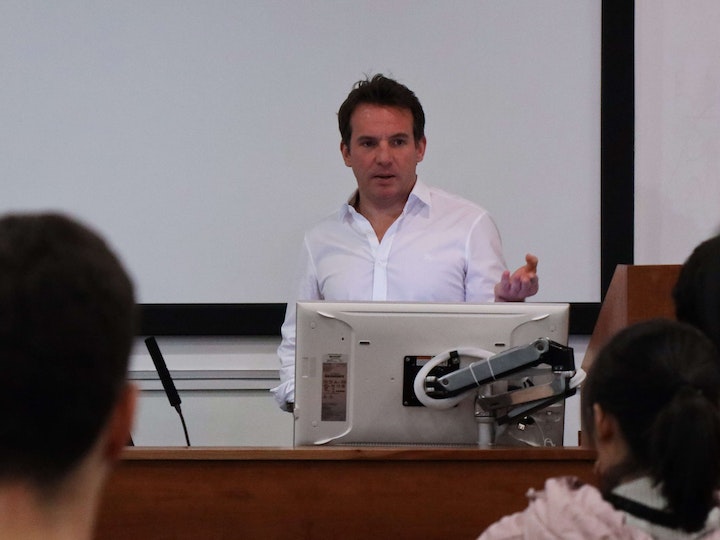 The 7th Industry Insights event was presented by David Slater and organised by the ICMA Centre in partnership with the University of Reading Finance Society. During this insight he talked about his career, his experience as a trader during the 2007-2009 crisis and the changes that happened after this event in the financial industry. He also gave out important tips for interviews.

David Slater is a Macro Hedge Fund Manager working for Trium Capital with an impressive CV. He was a trader for 20 years, and was employed by top tier banks for 16 years. He is also an alumni of the ICMA Centre.

Mr. Slater talked about how it was more difficult to apply for jobs before, as he remembers having to fill out 25 applications on paper. He finally got an internship at UBS on the trading floor which lead to his first job. His first assignment was to study the great depression, look at the interest rates back then and how they could hedge positions. He then became a fixed income trader, trading on short term instruments and subsequently went on to trade derivatives on a longer-term horizon.

In 2003-2004, there was a huge growth in the investment banking industry and it was becoming more and more competitive. This is when he learnt the importance of marketing oneself through expanding one’s network.

In 2007, when the crisis hit, he recalls that the first bank to drop was BNP Paribas, as they were freezing repayment on products they gave out. Some banks lost a lot during this period and some gained a lot, David was lucky to be on the winning side.

He then explained the difference in the mindset of banks before and after the crisis. Before, the primary focus would be to grow the business and the franchise while now the concern is more about the structure of the bank as more regulations have been introduced for the banking industry. The culture of communication and transparency has completely changed, phone calls are now registered so that the manager can judge the efficiency of a trader, knowing how much time the trader spends on calls, how many calls did he make and his turnover.

Investment banks are now recruiting more people for junior positions than for senior positions, they are replacing directors with associate directors and bringing in more analysts.

The sales and trading roles are being reduced as roles for the maintenance of trading algorithms have increased. The pool of candidates is becoming more and more international, thus more competitive.

He also told us what, as a recruiter, he expects us to know during interviews and what are the questions he often asks candidates. One interesting question that oftens comes out questions the construction of a trade, explaining your approach on that particular trade and how are you going to hedge it.

During the Q&A session, questions were mostly career focused and about how to land a front office job. He told us that it was easier to move from trading to sales than the other way around as trading is a much more technical job. It happens sometimes that people working in operations have switched to trading, as operations and trading work together. He also advised us to keep our options open not to focus only on front office jobs for the applications as they are the hardest to get into.

The ICMA Centre and the UoR Finance Society thank Mr. Slater for a really insightful talk!

Congratulations to the winners of the Chancellor’s Award 2013!

7 November 2013
Many congratulations to four of our ICMA Centre undergraduates who will be honoured at this year's annual celebration hosted by the Chancellor, Sir John Madejski and Vice-Chancellor, Sir David Bell.

17 February 2020
On Wednesday 5th February, the ICMA center were lucky enough to host Simon Cook, the Chief Investment Officer for Draper Esprit, as part of their Industry Insights series where he gave an in depth talk about his career working in venture capital, and his early steps to get there.
Industry Insights reviews