It has been another fantastic year at the ICMA Centre filled with new records, recruits and partnerships. 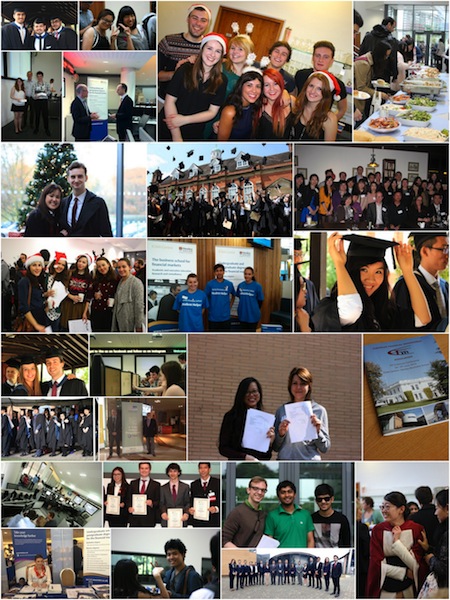 We were delighted to announce that the ICMA Centre BSc in Finance and Investment banking became an official CFA Program Partner and scored first class results in the National Student Survey 2013, with an overall satisfaction of 92% amongst students.

The MSc Financial Risk Management also became the first member of GARP’s Partnership for Risk Education in the United Kingdom.

We also launched a new scholarship for outstanding students from India for postgraduate masters studies bringing the total figure to £195,000 dedicated to scholarships for our Finance masters students for 2014/15.

We also had the opportunity to meet again with Alumni in various parts of the world and attend several international fairs to meet prospective students.

This year’s annual Stock Market Competition had over 25 teams representing seven schools from around the county and gave sixth formers a chance to taste the excitement of the trading room and apply their current knowledge of subjects such as maths, business and economics to the high speed world of international trading.

Our staff were featured in a wide range of publications around the world and we congratulated Dr Ioannis Oikonomu, who won the Henley Business School 2013 Research Output prize.

It was also a fantastic year for our students with, ICMA Centre PhD student Zilu Shang receiving the Best Paper Award at the Global Business and Social Science Research Conference. Continuing our PhD students’ success was Fahad Alhumaidah, who was published in RBS Reserve Management Trends 2013 and Dr Tom Markham whose research paper, 'The performance of football club managers: skill or luck?, in collaboration with Professor Adrian Bell and Professor Chris Brooks, gained both national and international attention.

We also congratulated our four ICMA Centre undergraduates who will be honoured at 2013’s annual celebration hosted by the Chancellor, Sir John Madejski and Vice-Chancellor, Sir David Bell. ICMA Centre students Amy Ho, Juvereya Shoab, Chunxin Zhou and Yunjie Xiao, were the top four performing students in last year’s Part 1 and Part 2 of the BSc Finance and Investment Banking programme. Particular congratulations to Amy Ho and Juvereya Shoab, who have been awarded this celebrated prize for the second year running, since they were also top performing students in the first year of their degree.

Finally, congratulations were also in order for our students who reached the Universities Business Challenge finals.