This year the ICMA Centre had more prizes on offer than ever before, to recognise outstanding academic achievement by both Postgraduate and Undergraduate students. Following the Graduation Ceremony on Friday 5 July 2013, several students were rewarded for their effort and performance and congratulated by their peers and ICMA Centre staff. 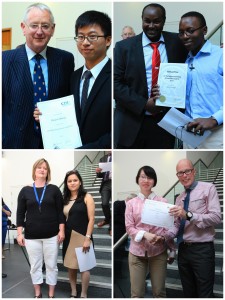 This year the ICMA Centre had more prizes on offer than ever before, to recognise outstanding academic achievement by both Postgraduate and Undergraduate students. Following the Graduation Ceremony on Friday 5 July 2013, several students were rewarded for their effort and performance and congratulated by their peers and ICMA Centre staff.

Undergraduate, Yihan Zhou, was awarded £500 for winning the BSc Academic Achievement Award 2013, presented by the Head of School, Professor Adrian Bell. Ed Stittle, was also awarded £150 worth of Amazon vouchers for winning the prize for Outstanding Contribution to the BSc FIB programme for the duration of the undergraduate programme.

One of this year’s newly established awards, the CISI Educational Trust award was awarded to Binjian Zhang, for the best overall marks in one of the ICMA Centre’s full time Masters degree programmes. The certificate and award of £2,500 was presented by the CEO of the Chartered Institute for Securities & Investment, Simon Culhane.

The Danos Associates prize for Excellence in Capital Markets, Regulation and Compliance, was shared between two students, Anna Kildeeva and David Nader who each received £1,000 and a certificate handed by Victoria Scott-Villars and Richard Thomas, business partners at at Danos Associates.

Heng Chen was awarded The Worshipful Company of International Bankers Prize for the Best Research Project and was awarded £300 by Liveryman, Stephen Clark. 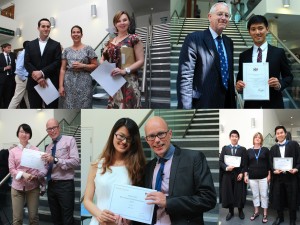 The winner of the longstanding ICMA Centre MSc Academic Achievement Award 2013, was Chen Ling who received £500 for excellent academic performance in an MSc programme.

Finally this year’s recipient of the annual Vetiva prize for an outstanding postgraduate student from an African Country was Tonny Langat, who was awarded a £1,000 prize by previous recipient Chardin Wese Simen. The Vetiva prize was established by one of the ICMA Centre’s alumni, Dr Olaolu Mudasiru, who graduated from the ICMA Centre in July 1998 and is now Deputy Managing Director of Vetiva Capital Management Limited in Nigeria.

Congratulations to all of the winners of the academic prizes and to everyone who graduated this year.

The large fine imposed on RBS last week suggests that a ‘scandal’ took place in the banking world over the setting of LIBOR. Yes – there was probably systematic mis-pricing of LIBOR which enabled some traders and some banks to profit at the expense of others. But the LIBOR issue simply highlights a much wider problem in financial markets which is that many ‘prices’ quoted in markets are not market prices at all. Instead they are prices based on computer models, matrix pricing or sheer guesswork, which may or may not produce ‘accurate’ prices. The reason for using computers models and guesswork is that in many financial products there actually are no transactions at all or very few even over periods of some weeks or months and thus no market prices.