Professor Adrian Bell, Head of the ICMA Centre, was interviewed by BBC South on Thursday 05 December 2013. The BBC broadcasted live from one of the ICMA Centre's dealing rooms which was filled with students engaging in a trading simulation. The interview was reflecting on the Chancellor’s Autumn Statement. 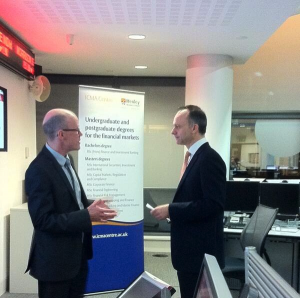 When asked about the Autumn Statement and economic growth in the Thames Valley, Professor Adrian Bell replied: "I think we are very lucky here in the Thames Valley, we are seeing lots of external investment, especially from Chinese companies, who are setting up here and employing local people, which contributes to the local economy."

BBC South's Business editor, Alistair Fee, asked what was driving the growth and Professor Bell stated: "Really we are looking at growth being driven by consumer spending because consumers are not saving since interest rates are close to zero. What we really need is investment to drive the economy forward."

You can watch the full interview on BBC South Today here or read more about our Thomson Reuters equipped dealing rooms here.

7 April 2009
The International Capital Market Association (ICMA), the ICMA Centre at Henley Business School (University of Reading), and CFA Institute are pleased to announce the introduction of the International Fixed Income and Derivatives (IFID) Certificate Programme to CFA Institute members.

Can we predict when football managers are no longer effective?

7 August 2019
As the new football season commences, the media is speculating on who will be the first manager to be sacked. Whilst economists have used their models to predict football events, academics from the ICMA Centre have developed a model to see if they could predict when a football manager is no longer being effective.
Business News

DIIS Conference: Central Banking in the Context of the European Crisis

15 January 2013
Senior Visiting Fellow at the ICMA Centre, Richard Comotto, will be speaking at the upcoming conference organised by the Danish Institute for International Studies, titled Central Banking at a Crossroads: Europe and Beyond. The Conference will focus on the future of Central Banking in the post-crisis period and look at how to restore stability to financial systems.