What next? Financial crises 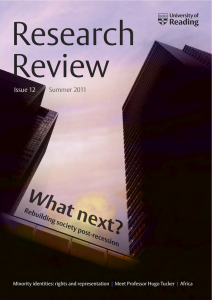 Professor Brian Scott-Quinn, the chairman of the ICMA centre for financial markets at Henley Business School, discusses financial crises and whether regulatory capture is to blame.

The crisis in the banking system which commenced in 2007 has caused most people to wonder what caused the problem. Even the Queen asked some economists who were visiting the palace why they could not have predicted it since they should have been able to know what indicators to look for in advance. While here at the Henley Business School's ICMA Centre we are researching the more arcane issues such as how to model financial risk better in future and how to calibrate liquidity requirements for financial institutions, the much more general questions that need to be answered are ?what caused it and who is guilty??.

In trying to find a root cause, we might simply say that it was sub-prime mortgages, or we could blame statistical modelling and risk management failures. But this is not a sufficient explanation. All financial crises have different causes ascribed to them, yet in fact they all seem to have one thing in common ? the symbiosis between bankers, regulators and governments.

Of course the monetary, fiscal and regulatory authorities are supposed to stop financial crises arising. We have the Bank of England, the Treasury, the Financial Services Authority and others all having a share of responsibility for financial stability. The Bank did at least warn the government of critical problems that were building up many times prior to the crisis. However, no one listened. But why would the government take any notice? The economy seemed to be doing very well, thank you, in 2006/7.

So what about the regulators? Banking and nuclear power are the most regulated industries worldwide simply because they can both have meltdowns. I would suggest that it was ?regulatory capture? that led to the financial crisis, just as it did in the nuclear crisis. By that we simply mean that nuclear regulators were too close to Tepco in Japan, just as bank regulators in the US, the UK and the Eurozone are too close to the major banks.

The relationship that bankers have to their regulators is much like that experienced during Stockholm syndrome; with regulators playing the role of the innocents captured by guerrillas. The best example of this was the story of Patti Hearst, the billionaire's daughter who was kidnapped by the so-called Symbionese Liberation Army in California in 1974 and ultimately joined her captors in furthering their cause by helping to rob a bank.

Capture, sadly, is also what happened to our regulators. The real problem in regulatory capture which is, I believe, central to the crisis, is the symbiosis between bankers and regulators, senior civil servants and government ministers. The regulators, if they are not former bankers, would like to be bankers, and aspire to be offered a job in the industry. The regulators also see the bankers as people who seem to understand an esoteric business which they find difficult to comprehend, and have a secret admiration for them.

One of the alarming things about the banking business is that despite the worst crisis in living memory, nothing much so far seems to have changed. Indeed one of the key regulators, the Controller of the Currency (in the US) was quoted in the Financial Times recently as having said at a City dinner (at which the author was also a guest) that we are actually in grave danger of over-regulating the banks, and that could be even worse than under- regulating them. He may be correct, but I doubt it.

So do I have any 'solution? to the problem? No solution but one insight we have from our research is that regulators need to pay more attention to ?outliers? ? financial institutions which stand out from others in some way. The particular way we think is relevant, is their growth rate. If we look at Fannie, Freddie and AIG in the United States and Northern Rock and RBS over here, they were all growing much faster than the pack before the crisis. Indeed for most of them, their asset growth rate was so high that it did not need much of an enquiring mind to ask why they were able to achieve such growth. Regulators probably did ask this but preferred not to act on it; had they done so they would have been blamed for damaging economic growth prospects. Indeed in the case of RBS it had a declared objective to become the world's largest bank, and it nearly achieved that goal, but fell at the last hurdle.

So our conclusion would be that regulators need to pay much more attention to the signals arising from the business strategy of a firm, and to ask why a firm is seemingly growing much faster than its competitors. In the answer to this question regulators may find the financial institutions they have to rein in. The next problem, of course, is how we will rein in governments who overspend and cause sovereign debt crises. That is, unfortunately, a much more complex issue.