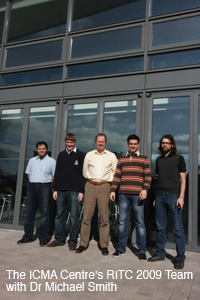 A team from the ICMA Centre at Henley Business School, University of Reading has just returned from competing in a prestigious international trading competition in Toronto.

The team of four ? all students of finance and banking ? took part in the annual Rotman International Trading Competition (RITC), competing against 36 others teams from top business schools around the world to come in a highly respectable 5th place, beating, amongst others, M.I.T Sloan School of Management, Harvard University, City University of New York Baruch College and Cass Business School, who came 21st.

The team was made up of Dimitris Korovilas from Greece, Satchit Sagade from India and Alexander Reece from the UK, all studying for an MSc in International Securities, Investment and Banking, and Christos Nedelkopoulos, from Greece, who is studying for an MSc in Financial Engineering. The team were coached and accompanied to the competition by Ioannis Oikonomou, doctoral researcher at the Centre.

Dimitris said, ?It was a once in a lifetime experience and we are really happy with the result. Providing the industry with good traders is part of what the ICMA Centre does and we were there to prove it in Toronto.?

The Canadian competition involved trading four separate trading cases which ranged from energy futures trading to a complex quantitative open outcry case. The competition was at the highest level and by all accounts very intense, but once again the ICMA Centre produced a winning team.

"Once again we have proved that we are really amongst the best in the world when it comes to applied trading?, said Dr Michael Smith, Dealing Room Director at the ICMA Centre. He added, ?our hands-on approach to teaching has produced students of the highest quality who are, in terms of their practical usefulness to an investment bank, far ahead of those who have had a more traditional theoretical finance education?.

Further trading success has been achieved by four undergraduates who are competing in the Merrill Lynch Challenge. The competition is in its final stages and the Centre's team is in one of the group of 45 teams (out of 300) which are to go through to the next stage. Teams that reach the top 15 will have the opportunity of obtaining an internship at Bank of America.

The ICMA Centre is pleased to announce six new additional scholarships for a total of £30,000 for outstanding students applying for a postgraduate masters. The new scholarships are available for 2014 entry at the ICMA Centre.

Momentum trading is a popular strategy in the commodity futures markets. The idea is simple. Suppose that an investor wants to invest in the first nearby contract of several commodity markets, e.g. crude oil, live cattle and gold. At the end of each month, the trader ranks these assets according to their past return performance, observed over a measurement period of 12 months for example, from the top performing asset to the bottom performing asset. The investor opens a long position in the first nearby of the markets that performed well and a short position in the first nearby of the markets that underperformed. These positions are held throughout the next month. This strategy has performed historically well historically and has attracted the interest of investors.

Fidelity, the asset manager with $2.4 trillion assets under management, recently announced the launch of two index mutual funds with a 0% fee! This announcement is interesting for several reasons. First, the asset management industry has been involved in an intense price war and this new fee level of 0% represents a very tough benchmark for the competition to beat. Not surprisingly, the share price of rival asset managers fell by a few percentage points shortly after the announcement. Second, the new fee level is unusual as it indicates that, for the first time, investors could get exposure to both US and international equities without incurring any fee. This is a curious business decision. How will Fidelity manage to pay for all its expenses? Will this product be a loss-making venture? Is there more to it than meets the eyes?