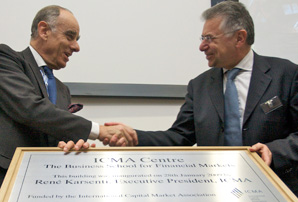 The ICMA Centre at the Henley Business School, University of Reading, celebrated the opening of its new state-of-the-art facilities yesterday. The inauguration ceremony, which was followed by a Champagne reception was attended by more than 200 guests, including businesses from the City and all over the world, as well as staff and alumni.

The building has been made possible by a major donation of £5 million by the International Capital Market Association (ICMA). The Centre's association with ICMA began in 1991 and the University's finance department was renamed the ICMA Centre with a mission to teach and research in the area of Capital Markets and ICMA continues to work closely with the Centre.

The new building, which has cost £6.5 million, includes a new 40-seat dealing room making the ICMA Centre the largest training facility of its kind in Europe. The dealing room runs the latest Thomson Reuters feeds on four plasma screens and there is also a ticker tape running the financial information in the atrium.

The new extension links to the 1998 ICMA Centre itself and houses a 185-seat lecture theatre, seminar room, media centre and dedicated research area. The latest AV equipment allows for live streaming of lectures and podcasts and there is a dedicated career development office.

Professor John Board said - "We are all delighted that our new facilities surpass expectations and are now ready for use by our students. Our new building was generously funded by the International Capital Market Association and reinforces their belief in the University and, of course, in the importance of education - particularly at a time when both the economy and the finance industry face so many challenges."