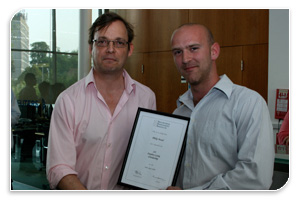 Two of the ICMA Centres high-performing BSc students have been awarded a prestigious investment banking prize by the Securities & Investment Institute.

The prize of £2000 is awarded to the highest performing second year BSc students, and is to encourage students to focus on high examination grades and to aquire a good understanding of the finance industry, as well as the personal attributes required for a career in the fast paced industry.

Tamoor and Philip, who both had to submit an essay to the board, as well as taking part in rigorous interviews in order to win the special award, were both delighted with their achievements. 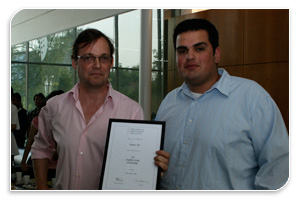 Tamoor aged 26, said: "I consider myself very fortunate to have received this award given the calibre of the competitors. It was a great experience, which provided an invaluable insight into the world of finance. I believe the BSc at the ICMA Centre has equipped me with the perfect skill set to give me the edge for a successful career in the City".

The pair were awarded the prize at the ICMA Centre's annual end of year BBQ in May.

10 May 2019
Four teams from the English Premier League are taking all the places in the two European finals. But why has the EPL taken so long to dominate European football?
Business News

20 October 2015
The Postgraduate Taught Experience Survey (PTES) is run by the Higher Education Academy (HEA) who are a national body dedicated to improving teaching and learning and enhancing the experience of postgraduate students. The in-depth survey results for 2015 allows us to listen to student feedback on what went well and what can be improved on.

31 October 2013
We are delighted to present JAMES GIFFORD, who founded the PRI initiative which now has nearly 1,200 institutions from more than 50 countries as signatories, including many of the world’s largest pension funds, insurance companies, and investment managers. They manage combined assets of more than US $34 trillion. James Gifford was also named in 2010 by the World Economic Forum as one of 200 Young Global Leaders.
Business News