The winner of the Chartered Institute for Securities and Investment (CISI) Educational Trust Award 2020 is Lin Cui, who is currently studying MSc Finance at the ICMA Centre. 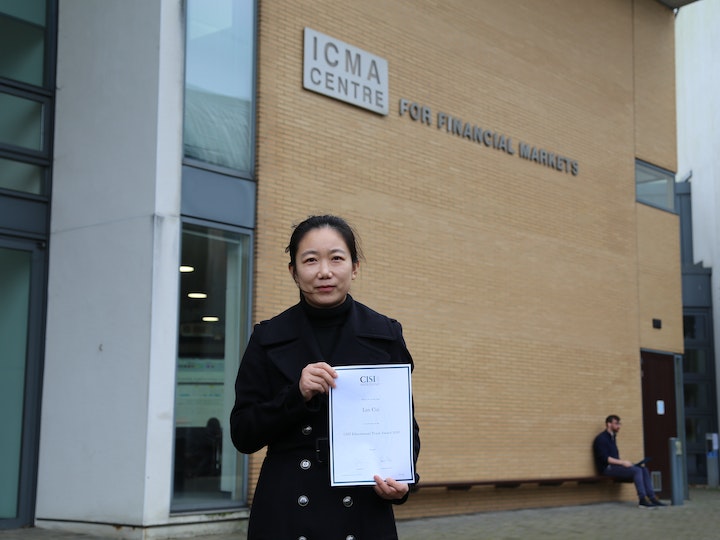 The winner of the Chartered Institute for Securities and Investment (CISI) Educational Trust Award 2020 is Lin Cui, who is currently studying MSc Finance at the ICMA Centre.

The awards celebrate excellence among postgraduate students and support winners as they progress into a career in the finance sector.

To be eligible, they must be studying for a CISI exam alongside their university course at CISI Centre of Excellence, which the ICMA Centre is, or a Partner University.

As a winner, Lin, from China, receives a £1,000 cheque and is invited to enter an essay competition, the top five entrants to which are then invited to the CISI offices in London.

There, they have a chance to network with trust members and additional award funds are available based on their performance at interview.

Speaking about the award, Lin said:

“I am so grateful and honoured to be the recipient of this award. I hope I get the precious chance to learn from experienced practitioners and communicate with other candidates at the CISI.

“I really enjoy my study life here so far, it offers me a wide and wise platform to learn about and observe the dynamic capital market.”

Capitalism is high on the political agenda. Like coffee it seems to come in a bewildering number of varieties. Some politicians like it "responsible" others "moral" and still others "popular". While some argue that it is time for shareholders to wield real power, others feel that that certain shareholders, notably hedge funds should sit on their hands, at least if they have bought shares after a takeover has been announced. Out on the streets the tents of the "occupy" protectors may be under threat but many are sympathetic to the view that bankers and board members have been rewarded for taking too many risks with other people's money.

Hydrogen trains are coming – can they get rid of diesel for good?

For a brief moment on Tuesday 21st July, the online database of medieval soldiers (http://www.medievalsoldier.org/) hosted at the ICMA Centre, was the news! This database of soldiers serving the English crown between 1369-1454 and including the names of men-at-arms and archers who served at famous battles such as Agincourt in 1415, made the front page of the BBC website, was the most shared site on BBC news online, and interviews were given to BBC Radio Four and 5Live, local radio and even the national radio broadcaster in Canada. Some 250,000 service records are now available to freely search and the database recorded some 125,000 hits on Tuesday alone. The database has gone from strength to strength and this publicity has made the online database extremely popular, and it has now registered 3.5 million hits in just three months - demonstrating the interest of our research to the public at large.