Here's the review of a recent Industry Insights talk with Tim Skeet from the Bank of China, written by Ieuan Edmonds, President of the Finance Society 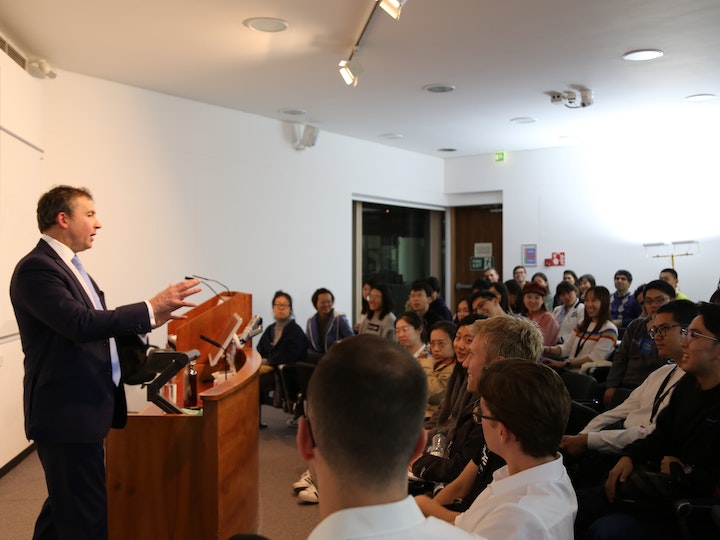 Tim Skeet, an ICMA Centre visiting fellow, joined us on the 9th October to discuss how to sustain a career in the dynamic finance sector. Tim has worked at the Bank of China for a year and a half now within the debt capital markets business as a senior advisor and has navigated a four decade long career in the industry based in London. Tim emphasised the importance of ‘enjoying what you do to live a full life’, despite ups and downs he is still here, still enjoying.

The Bank of China is the fourth largest bank in the world, employing 310,000 people, with 11,000 branches and 6,000 employees outside of China with a growing contingent of non-Chinese. Tim regards the Bank of China as the nicest place he has worked with challenges everywhere.

Tim talked about how the culture of the banking industry is forever changing. The industry is a cultural melting pot bringing together the brightest individuals, driven by a common raw material – money. With emphasis on the speed at which the industry is changing and progressing, Tim advised to leave behind preconceptions and remain agile and be able to re-learn and re-adjust as required. Careers in finance are seldom linear, time will allow you to shift into different jobs and often open unexpected and rewarding doors. Your comfort zone will be what holds you back and stops you from re-engineering yourself successfully. Changes from Asia will be significant in the way the industry works due to increasing scale and developments, Tim predicts that half of future global GDP will be split between China and India with the US and UK trailing behind.

Brexit, the unspoken B-word, was discussed briefly with the main takeaway being to always have a plan B, an alternative option. Tim has been fortunate in gaining a French passport which will allow him to work in Europe, should it be required. Learning a language will be beneficial but English will always be the language of the industry due to its global nature – however, native speakers must be mindful of the barriers this can hold.

During the session the importance of Green Finance and the role of financial services was also covered. The industry as a whole is slowly waking up to what is required to address climate change and will play a big role in the transition, largely through capital allocation. Tim works closely with the ICMA who have set the industry framework for Green Finance. Tim also highlighted the importance of encouraging every part of the economy to improve, suggesting the introduction of more shades of brown through green. Green Finance in China is not the same as the rest of the world, they have not reduced coal usage but have increased their efficiency in doing so.

Tim discussed a number of changes that are taking place within the industry at the moment which included the transition to a cashless global society and the shift away from American culture which will soften the industry.

Reading material suggested included Barbarians at the Gate, Liars Poker and the Big Short. These books capture the spirit of the industry and are classics, but it is worth being aware that much has changed since their publication and will continue to do so.

Tim joined students for a networking session following his insightful and educational talk where further discussions were held covering careers, applications and the future of banking.

The ICMA Centre and the UoR Finance Society are extremely grateful for Tim Skeet’s time in joining us once again for an insightful and engaging session.

In this week’s Industry Insights, Siddarth Malik gave us a fascinating and intriguing insight into his career as an investment banker at Goldman Sachs and Bank of America Merrill Lynch.

As always, student members from the University of Reading Finance Society have provided a review of the most recent Industry Insights event: