The annual ICMA Centre Stock Market Competition 2013 took place on Monday 08th July. The competition open to year 12 students from around the Berkshire area, saw the Willink school gain 1st place for the second year in a row, followed by students from Reading School who gained both 2nd and 3rd place. 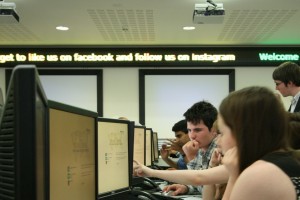 The team from The Willink School were up against 25 other teams representing seven schools from around the county. Prizes this year included iPad minis for the winners, iPod touches for the second placed runner-up and Nook eReaders for the third placed runner-up.

Trophies were presented to the Schools at the end of the competition by Professor Mike Smith, lecturer in finance and director of the dealing rooms and Dr Ioannis Oikonomou, Director of the BSc in Finance and Investment Banking.

The competition consisted of a series of simulated trading sessions based on specific scenarios that were generated by the competition organisers. It was run entirely on the ICTrader trading platform which was co-created by FitchLearning and the ICMA Centre. Students traded a variety of U.S. firms’ stocks in real time with the price of the stocks evolving rapidly in connection to the macroeconomic, industry related and firm specific news items that the competitors saw on their screens.

Participating students and accompanying teachers were provided with an explanatory handbook in order to prepare in advance for the competition. 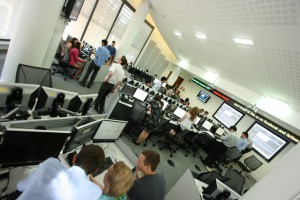 The event opened with a training session followed by two rounds; In the first round students were asked to act as market makers, proprietary traders and brokers against simulated counter parties (investment banks and individual or institutional clients). In the second round students had to make transactions with each other as if they were part of a stock market trading pit – offering a taste of the noise, stress and excitement that comes with that experience! Each team was awarded points for their performance in each section of the competition with a maximum of 13 points available to the best placed team. The winning team were those who gained the highest points in aggregate across both rounds of the competition.

The winners from the Willink School were very impressive, being consistently at the top of the leaderboard throughout the day. Previous winners of the competition, Daniel Johnson and Daniel Hallisey also attended the competition as observers.

The competition proved to be a highly energetic and stimulating day for all involved.

Welcome to the ICMA Centre