Capitalism is high on the political agenda. Like coffee it seems to come in a bewildering number of varieties. Some politicians like it "responsible" others "moral" and still others "popular". While some argue that it is time for shareholders to wield real power, others feel that that certain shareholders, notably hedge funds should sit on their hands, at least if they have bought shares after a takeover has been announced. Out on the streets the tents of the "occupy" protectors may be under threat but many are sympathetic to the view that bankers and board members have been rewarded for taking too many risks with other people's money. 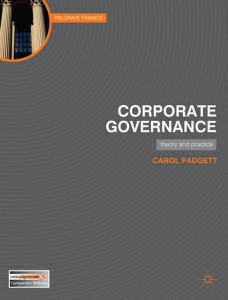 In Corporate Governance: Theory and Practice, Carol Padgett explores these issues, considering why shareholders may not see themselves as owners of companies and examining new regulation designed to change this view. The book covers a variety of other governance topics including directors' remuneration, using a wealth of examples from companies around the world.

'Carol Padgett has written an excellent book on corporate governance. It is comprehensive and thorough in its coverage of an important and expanding topic. The book combines an extensive review of the relevant literature with an insightful description of corporate governance policy and practice. It is well illustrated with case studies and examples, and it guides the reader carefully through the different aspects of current corporate governance debates.' Colin Mayer, Peter Moores Professor of Management Studies, Saïd Business School, University of Oxford, UK

'This text provides an excellent and comprehensive introduction to corporate governance and leads the reader through what would otherwise be complex theoretical concepts and issues in an easy-to-read and understandable manner. Explanations are very clear and the book is punctuated with real world examples of the governance issue at hand. This should be an essential text for corporate governance students or for those wishing to gain a strong grasp in this subject without getting lost in complicated jargon.' Dr. Bruce Hearn, Course Director MSc Finance, University of Leicester, UK

14 July 2010
ICMA Centre Senior Fellow Richard Comotto has appeared on Reuters commenting on a recent International Capital Market Association (ICMA) white paper looking at the financial crisis in Greece and the preceding crisis with the collapse of Lehman Brothers.

Professor Brian Scott-Quinn answers questions on the social value of high frequency traders on the FT.com

22 March 2010
Professor Brian Scott-Quinn, non-executive Chairman at the ICMA Centre, has been interviewed on the Financial Times.com 'Trading Room' webcast, tackling the question of 'Are high frequency traders socially useful' Professor Scott-Quinn also looks at the difficulty determining who owns a company's shares, due to high frequncy trading's quick turnovers.